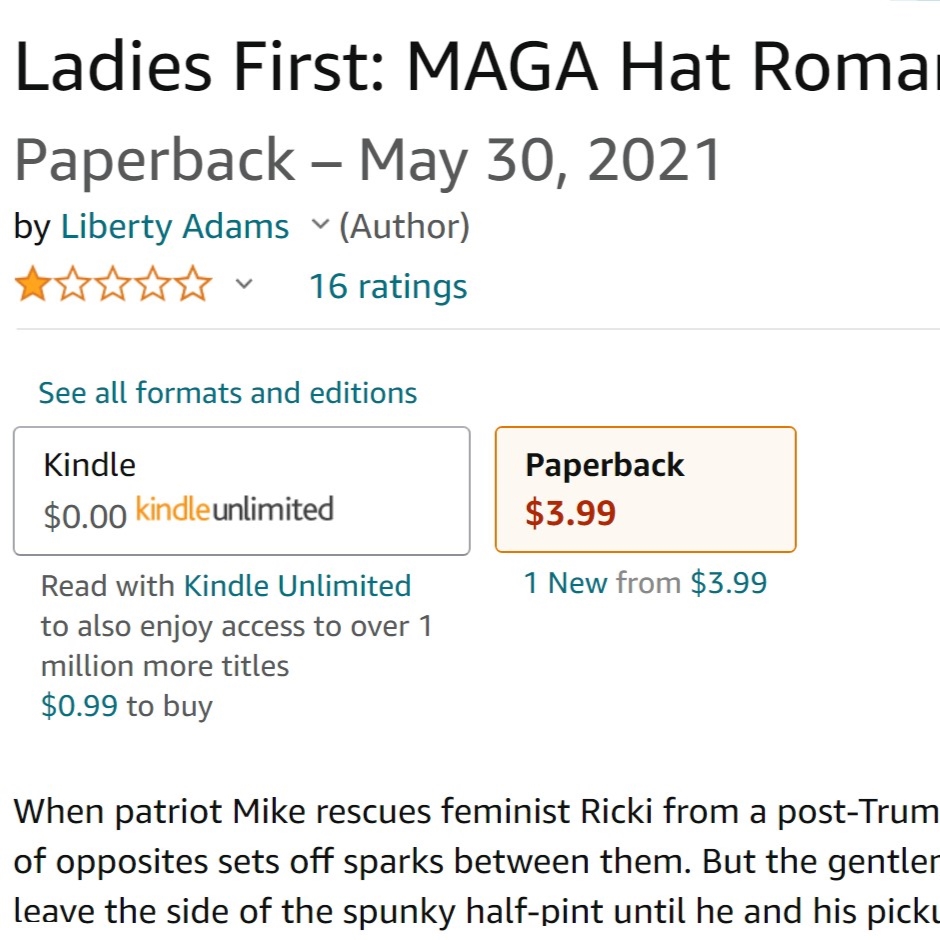 Trump Derangement Syndrome (TDS) n. a mental condition in which a person has been driven effectively insane due to their dislike of Donald Trump to the point at which they will abandon all logic and reason (Twitter @The_Jingoist)

It seems I’ve created a stir in the universe. After a year with little attention paid to my Amazon-published romance series “MAGA Hat Romance,” the Lefties got wind of Book One, “Ladies First.” In just the past couple of weeks, the numbers of reviews jumped from 1 to 15, and THEY ARE ALL ONE STARS. Every single one. What might be the reason for such negative ratings? A quick look at the series title ‘MAGA Hat Romance’ should give you a clue. I, Liberty Adams, had the nerve to write a romance series whose characters reflect the world of America-first Trump supporters who put faith, family and freedom at the forefront of their lives.

A quick chat with a pal of mine who reads Google Analytics like a fortune teller on tea leaves confirmed my suspicions. The traffic had come from people who consider BLM/Antifa rage riots ‘peaceful protests’, and Sunday afternoon Trump boat rallies full of smiling patriots ‘seething cauldrons of hate and violence.’ Trump Derangement Syndrome is alive and well on Amazon.

My reaction to this news? I babysat my grandchildren and then spoke at my local precinct meeting. The topic? Playing smashmouth politics with the Democrats in the voting booth for 2022. In short, I continued life as usual, indifferent to their ridicule. Besides, I saw this reaction coming a hundred miles ago and wrote the series anyway. How could I not? It has been an absolute blast to write stories that appeal to America First patriots and trigger the opposition at the same time. For they deserve every bit of parody and comeback they get.

These melting snowflakes cannot argue against the merits of a project whose readership comprises seventy-five million-plus Trump voters, and neither are they capable of simply leaving us alone. Instead, they predictably overplay their hand as they try and tear down the MAGA Deplorables – we hard-working Americans who face the daily attacks and lies heaped upon us, who know how many genders there are and which bathroom to use. And their attempts to demoralize us only bring their party closer to its complete and utter destruction. Believe me, readers, when I tell you that despite their bullying, despite the media lies, the end of the Democrat party is within our grasp, as close as your ballot box come November. For MAGA is ascendent in 2022 (h/t Steve Bannon), our movement made ever stronger by their shocking, blatant and criminal theft of our votes in 2020.

In the meantime, I have one request – and that is, play a little smashmouth of your own on the march toward November. Join the thousands of patriots who brave the storm every day. Dare to trigger that sweet TDS. Go to MAGAhatromance.com, click on ‘Ladies First’ and get the book and read it (99 cents on Kindle, free on Kindle Unlimited or $3.99 for the paperback).

Next, give it a review. Then tell your friends. If you don’t wish to write comments, just mark the number of stars you think it deserves in an honest act of good faith that will dilute their dishonest pile-on. It is a small price to pay and a small part to play as we await the great November take-down.